Image of a Cutting Needle biopsy of the wall of a cystic nodule as seen here could have proved it was benign normal thyroid tissue. EBT is rare and usually associated with abnormal disease in the thyroid gland in the normal position.

3.This is usually felt to be part of a primary thyroid cancer in the normal located thyroid gland.

4.Tumor board presentation determined that her clinical presentation was most consistent with stage I cT1N1b regionally metastatic papillary thyroid microcarcinoma (PTC) to the right lateral neck without an identified primary lesion on preoperative imaging.

6.At surgery the neck mass was benign thyroid tissue on frozen section.

7. The portions of the scheduled surgeries that were performed were right lateral neck dissection, right hemithyroidectomy, and right-central compartment neck dissection.

neck dissection specimen contained 45 lymph nodes, all of which were negative for carcinoma.

10. The patient has to take thyroid hormone for life.

11.The findings are best classified as a benign ectopic thyroid nodule with cystic alterations.

12.Presentations of ectopic thyroid in the lateral neck often mimic the clinical presentation of cervical metastasis of a thyroid malignancy with unknown primary.

13.There were many chances to save the thyroid gland and avoid the neck dissection.

15. The physicians were leaning toward surgery whether subtotal, total with a big neck dissection all for something that a major university should have considered before surgery.

17. Biggest mistake was removing the half thyroid gland. 80% will need thyroid hormone for life even with just one lobe removed.

18. The paper stated “This approach can balance safe and effective oncologic care with reducing the morbidity of potentially avoidable surgery that would predispose the patient to lifelong high-dose thyroid hormone replacement.”

19. This was false as the patient had hypothyroidism treated with LT4 after the surgery.

20. The physicians were leaning toward surgery whether subtotal total with a big neck dissection all for something that a major university should have considered before surgery.

What did we learn? Failure to get the best thyroidologist to do a second opinion BEFORE the surgery could have saved the patient the pain,expense, and lifetime treatment for hypothyroidism.

Even a top university like with expert thyroidologists, cytologists, and molecular marker experts may not have ask for consultative help before the knife was used.

The benign ectopic thyroid nodule could have been ablated with RFA and spared to patient all the anxiety fear and morbidity of major thyroid surgery.

Ectopic thyroid is uncommon, with an estimated prevalence of 1 in 100,000, and involves the presence of thyroid tissue in an abnormal location, most often in the midline neck near the base of the tongue with an absence of an orthotopic thyroid [1]. Less commonly, ectopic thyroid can occur off midline in the submandibular space (level Ib) or, rarely, in the lateral neck (levels II-IV) [2-6]. We describe a case of benign ectopic thyroid presenting in the right lateral neck (level IIa) with a coexisting benign orthotopic thyroid. Initially, the lesion was suspected to represent cervical metastasis of a thyroid malignancy without a known primary. However, the intraoperative appearance and frozen section analysis of the lateral neck lesion appeared benign, which changed the surgical management and allowed the preservation of the patient’s thyroid gland. This case illustrates clinical pearls for the diagnosis and management of ectopic thyroid in the lateral neck in the rare case that it is encountered. The Stanford Institutional Review Board provided an exemption for this report.

A 49-year-old female presented to our clinic with a painless mass in the right neck that had been asymptomatic and stable in size for 1.5 years. The mass had been first noted incidentally by her dentist. She had no history of radiation exposure and no personal or family history of head and neck cancer. On examination, the mass was soft, non-tender, mobile, and deep to the sternocleidomastoid muscle. Ultrasound (Figure 1), computed tomography (CT) (Figure 2), and magnetic resonance imaging (MRI) demonstrated a 1.5 x 1.8 x 2.1 cm partially cystic lesion in the right neck compartment (level IIa) and a normal, orthotopic thyroid gland with no suspicious nodules. Fine needle aspiration (FNA) of the right neck lesion demonstrated paucicellular cyst fluid with elevated thyroglobulin (>30,000 ng/mL) and no epithelial cells, consistent with a cystic lesion containing thyroid tissue. Because no epithelial cells were recovered, the cytologist was unable to directly visualize thyroid tissue cells in the sample to assess for features concerning for malignancy. Endocrinologic workup revealed her to be euthyroid. 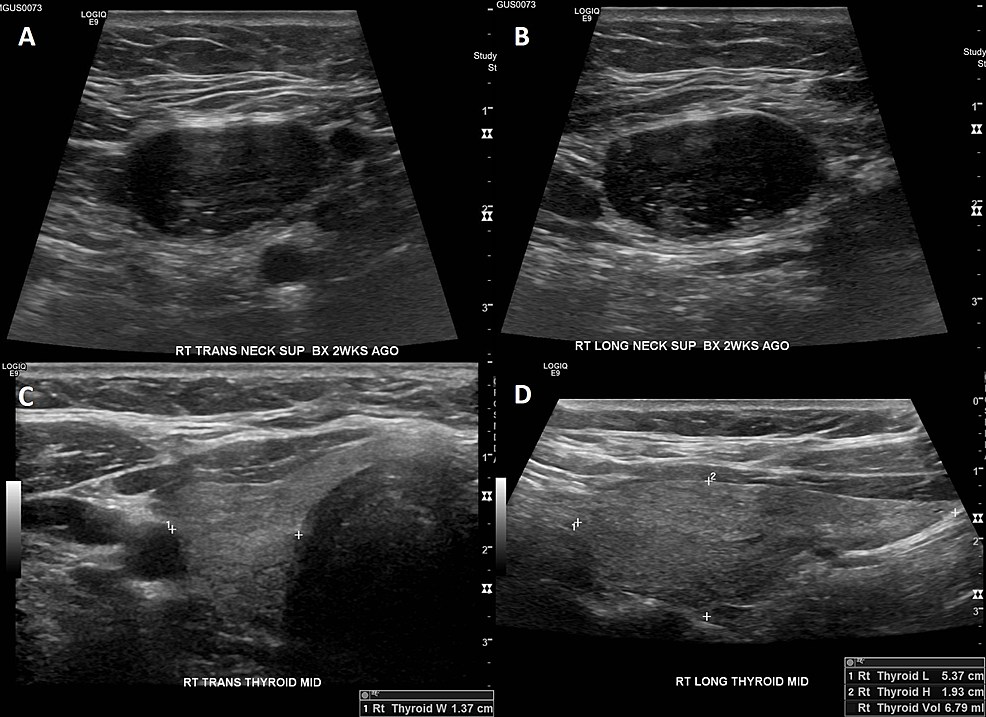 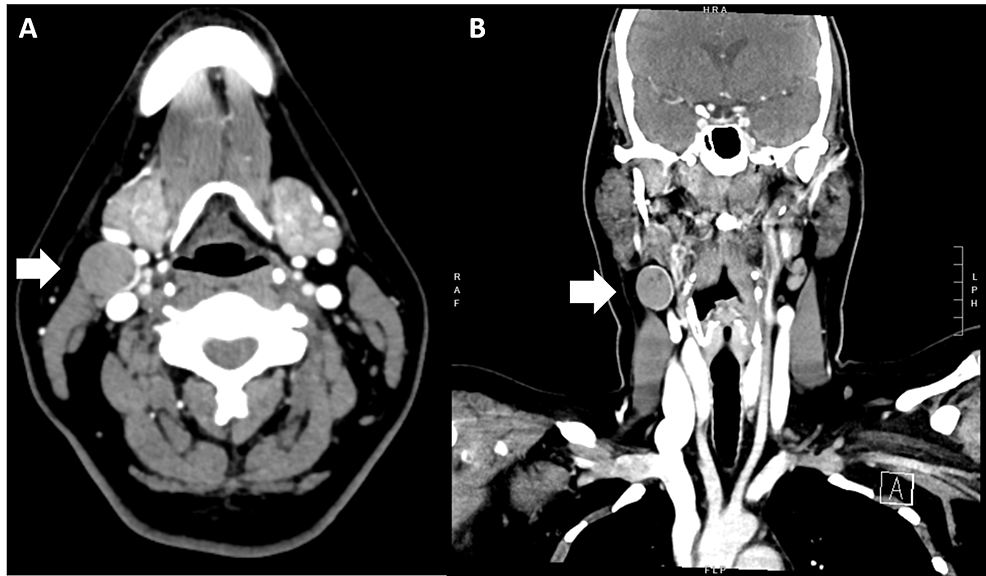 Figure 2: Computerized tomography (CT) scan of the neck with contrast

(A) Axial and (B) coronal contrast-enhanced CT images reveal a 1.9 x 2.0 x 2.2 cm soft tissue lesion in the right neck compartment (level IIa) (white arrows) with peripheral enhancement and areas of central low attenuation. There is an associated nodular focus of hyperdensity that could represent enhancement versus calcification. This scan was obtained three months after the fine needle aspiration biopsy of the lesion.

Final histopathology demonstrated the right neck mass to be a benign thyroid nodule with cystic alterations and no evidence of malignancy (Figure 3). The neck dissection specimen contained 45 lymph nodes, all of which were negative for carcinoma. The right thyroid lobe pathology demonstrated benign thyroid parenchyma with multifocal adenomatoid nodules. At the 14-month follow-up, the patient was doing well with no evidence of disease, normal vocal-fold mobility on flexible laryngoscopy exam, and stable subclinical hypothyroidism on low-dose levothyroxine.

Table 1: Reported cases in the literature of ectopic thyroid in the lateral neck (levels II-IV)

Presentations of ectopic thyroid in the lateral neck often mimic the clinical presentation of cervical metastasis of a thyroid malignancy with unknown primary. Detection of thyroid tissue outside of the central neck compartment (level VI) rightly warrants strong suspicion for cervical metastasis of a primary thyroid malignancy until proven otherwise. The rare presentation of an off-midline ectopic thyroid is important to be aware of in cases in which preoperative imaging does not reveal a primary thyroid malignant lesion, and there is strong clinical suspicion for a benign lesion based on intraoperative findings. In such cases, a staged approach can be considered with upfront excisional biopsy and frozen section analysis prior to staged completion of thyroidectomy and central neck dissection. This approach can balance safe and effective oncologic care with reducing the morbidity of potentially avoidable surgery that would predispose the patient to lifelong high-dose thyroid hormone replacement.