1. A Pioneer in Minimally Invasive Surgery.

2. He is 101 years old and still has passion for his work. Arises early to walk go to the gym then spends 3 days a week at Cedars and the rest of the week he works form home.

3. In his decades at Cedars-Sinai, Berci developed new visualization techniques, miniaturized instruments and high-definition cameras—critical advancements that revolutionized the field of minimally invasive surgery and continue to influence nearly every surgical specialty. He was the one to save patients the risk of major surgery with his minimally invasive procedures.

4. He has an eagerness to work on his projects, and when asked about when he will retire his answer was NO.

5. He is a role model for all of us dedicated physicians who live to get up everyday to heal the sick.

7. Bravo youngster keep up the good work. Most physicians retire before they are 80. He has inspired me to press on and continue working just like him.

George Berci, MD, Survived the Holocaust, Revolutionized the Field of Minimally Invasive Surgery and Has Become a Mentor to a Generation of Surgeons

As a young man during the Holocaust, George Berci, MD, was conscripted into forced labor in his native Hungary, narrowly escaping death at the hands of the Nazis even as members of his family perished.

Over the decades that followed, Berci forged a legendary career in medicine, pioneering endoscopic and laparoscopic techniques that provide the basis of virtually all minimally invasive surgeries performed today.

This week, Berci logged his latest milestone: He turned 100. And he didn’t miss a beat, reporting to work first thing in the morning at Cedars-Sinai just as he’s done every workday for more than half a century. 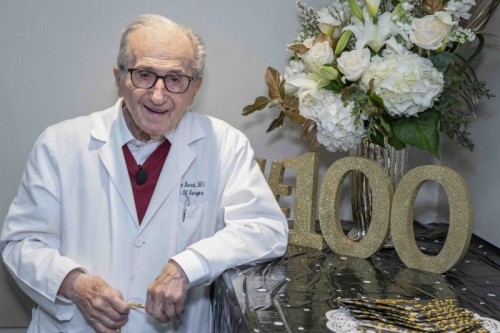 To mark the occasion, dozens of Berci’s colleagues, friends and students from around the world celebrated his birthday with a surprise Zoom party, recalling the impact of an inspirational leader and beloved mentor known for his trademark optimism, creativity and energy.

“The person that we’re celebrating is unquestionably one of the most interesting men in the world,” said Bruce Gewertz, MD, surgeon-in-chief and chair of the Department of Surgery at Cedars-Sinai. “It is impossible to find anyone with more enthusiasm and imagination.”

When asked about the recipe for a long, vibrant and successful life despite the conflict of his early years, Berci said the secret has been keeping the mind and body moving.

“For the past 100 years, I get up very early,” said Berci, now a professor emeritus at Cedars-Sinai and senior director of surgical endoscopy and innovation research, who still speaks with the Hungarian accent of his youth. “I go through what I need to do for the day, eat two pieces of toast with a cup of tea, take a short walk or go to the gym and then I am usually at work by 7 a.m.”

Berci’s calm exterior and dedication to his craft conceal an early life of great tumult and struggle—conditions he repeatedly overcame through steely determination and remarkable endurance.

His path to becoming a physician was stalled by the outbreak of World War II, when he was conscripted as a laborer for the Hungarians, who were under the direction of the German army. He eventually was transferred to a railway center near the Polish-Czech border, where he unloaded explosives for the Axis war effort.

In the summer of 1944, Berci and hundreds of other Jewish laborers were packed onto a train destined for the death camps. The train stopped near the Hungarian capital during an air bombardment by British and American forces, which caused guards to flee.

Berci made his way back to Budapest and soon was recruited to work for the Hungarian underground. 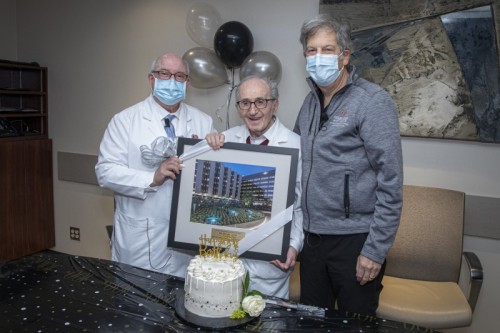 After the war, Berci stayed in Hungary and, following his mother’s wishes, pursued a career in medicine, earning a medical degree from the University of Szeged in 1950. He continued surgical training and returned to Budapest in 1953 to help establish one of the first experimental surgery programs in Europe.

A few years later, Berci won a Rockefeller Fellowship in surgery and moved to Australia. And a little more than a decade later, Berci’s reputation for medical innovation and research caught the attention of Leon Morgenstern, MD, the founding director of Surgery at Cedars-Sinai. In 1967, Berci was recruited to join the Department of Surgery as a visiting scholar. Three years later, he joined the faculty and, with Morgenstern’s help, established the medical center’s first multidisciplinary endoscopic surgical division.

A Pioneer in Minimally Invasive Surgery

In his decades at Cedars-Sinai, Berci developed new visualization techniques, miniaturized instruments and high-definition cameras—critical advancements that revolutionized the field of minimally invasive surgery and continue to influence nearly every surgical specialty.

His passion for creating tools to improve the imaging and viewing capabilities of endoscopes has brought him to academic institutions around the world. Alongside his surgical work, Berci has produced dozens of books, scientific papers and teaching films. His latest book, published in 2019, is titled, “The Scope of My Life, An Autobiography.”

In 2011, Berci was awarded the Jacobson Innovation Award, the highest honor bestowed by the American College of Surgeons. He also has received an honorary doctorate from Semmelweis University in Budapest, with a building named in his honor. He is a founding member of the International Biliary Association and a past president of the Society of American Gastrointestinal Endoscopic Surgeons, which created the SAGES George Berci Lifetime Achievement Award in Endoscopic Surgery.

“He is probably one of the greatest postgraduate educators that has ever been,” said Edward Phillips, MD, executive vice chair of the 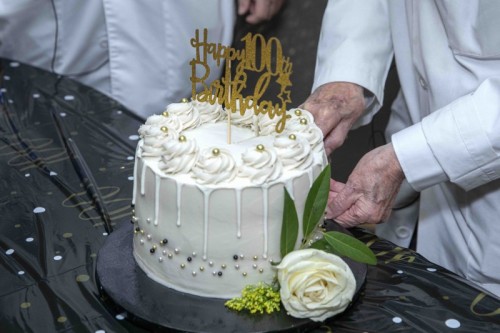 Department of Surgery at Cedars-Sinai. “Whenever he sees a new technology, instrument, or develops one, his first thought is, ‘How am I going to teach everyone?'”

Phillips and dozens of other colleagues, friends and former students lauded Berci during this week’s Zoom birthday party that attracted well-wishers from across the U.S., Canada and Japan. Many appeared in a birthday tribute video, calling Berci a role model and noting his continued stamina and imagination.

“You are the kind of surgeon we should all aspire to be,” Nicholas N. Nissen, MD, director of Hepatobiliary and Pancreatic Surgery and surgical director of Liver Transplantation at Cedars-Sinai, said on the video.

While Berci no longer treats patients, he goes into work every day to teach residents at the Women’s Guild Simulation Center for Advanced Clinical Skills and continues his lifelong work creating surgical improvements in the laboratory.

Gewertz, who joined Berci in person for the celebration in a surgery department conference room, said the party was “a celebration of life and a man who has continued to contribute at the very highest level for all these years. We certainly anticipate a similar celebration in a hundred years when George turns 200.”

As the party wound to a close, Berci offered a simple message for his guests.