Skin Metastasis From Papillary Thyroid Cancer: Another Use for Radiofrequency Ablation RFA instead of Surgery.

Skin Metastasis From Papillary Thyroid Cancer: Another Use for Radiofrequency Ablation RFA instead of Surgery. 1. Skin metastatic disease is rare in papillary thyroid cancer. She had only thyroidectomy only 30 years ago.

2. This report of a single case with review of the previous reported cases.

3.The patient had symptoms of pain and itching in skin nodules.

4. She had lung and bone spread as well.

5. She is not cureable but palliative therapy of the skin lesions would relieve the symptoms of pain and itching.

6. Cutaneous metastases are known to be associated with poor prognosis secondary to a huge underlying disease burden, with an average life span of eight to 19 months. Some cases have only skin involvement and are possible cures.

7.The scalp nodule was firm, erythematous, and mildly tender, with a size of 1 × 1 cm.

The other subcutaneous nodule over the medial right arm measured about 1.5 x 1.5 cm and was non-tender, mobile, and associated with erythema and scabbing 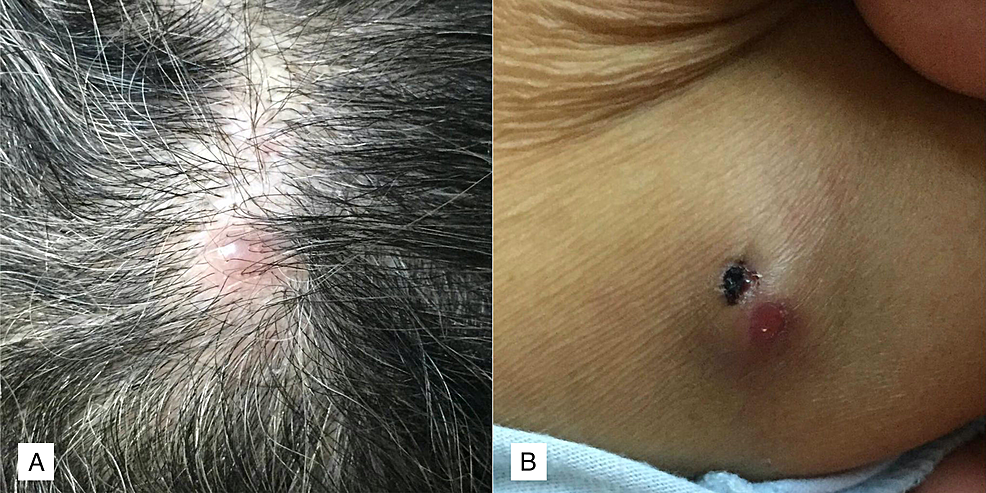 8.She failed chemotherapy and died without treatment to the painful skin lesions.

9. The treatment in the past was surgical excision but today radiofrequency ablation RFA is the treatment of choice to relieve itching and pain. It is only for symptom relief if there are serious metastatic disease throughout her body.

10. Sadly there is no mention of treatment to relieve her pain symptoms.

11. Rare but Isolated skin metastatic disease without systemic spread was seen in 6 reported cases and was treated with surgery.Now these may be cured by RFA ablating the skin lesion instead of surgical excision as  reported in these earlier cases before RFA.

The skin is an extremely rare site of metastasis from papillary thyroid carcinoma (PTC) and is linked to underlying disseminated malignancy, which reflects a dismal prognosis. We present the case of a 70-years-old Saudi female who presented at our clinic with an eight-month history of two painful and itchy skin nodules over the scalp and the medial aspect of the right arm. She had a history of total thyroidectomy for PTC 30 years prior. Computed tomography-positron emission tomography showed multiple fluorodeoxyglucose avid lung and skeletal metastases. This case highlights the fact that skin nodules in a patient with a history of PTC should be assessed carefully with a high suspicion of skin metastasis to avoid any delay in treatment.

Thyroid carcinoma is the second most common malignancy following breast cancer among females in Saudi Arabia [1]. Despite the excellent prognosis of the papillary thyroid carcinoma (PTC) type, approximately 4-23% of patients with PTC eventually progress to metastatic disease, predominantly to the lungs, bone, and central nervous system [2,3]. Skin as a site of distant metastasis secondary to PTC is an extremely rare entity (<1%) [4]; however, the scalp and upper torso are the most common locations [5]. In our previous study of 370 Saudi patients with PTC treated at our hospital, distant metastases manifested only in 10.4% of the cases, with no single case with skin as a site of distant spread [6]. Furthermore, cutaneous metastases are known to be associated with poor prognosis secondary to a huge underlying disease burden, with an average life span of eight to 19 months [7]. Here, we present a rare case of skin metastasis to the scalp and right medial arm that occurred 30 years after the primary treatment for PTC.

A 70-years-old non-smoking Saudi female without a family history of thyroid cancer presented to our clinic with complaints of mildly painful skin nodules over the scalp and an itchy skin nodule over the medial aspect of the right arm that had been present for eight months. During this period, she was treated with antibiotics by her general practitioner for a suspected skin infection on multiple occasions. According to her medical history, she underwent total thyroidectomy for PTC (follicular variant, pT2N0) without any adjuvant radioactive iodine (RAI) ablation 30 years prior to her visit.

The patient was taking thyroxin 100 mcg daily and had irregular follow-ups with an endocrine clinic. During physical assessment, her performance status was an Eastern Cooperative Oncology Group (ECOG) score of 3. The scalp nodule was firm, erythematous, and mildly tender, with a size of 1 × 1 cm (Figure 1A). The other subcutaneous nodule over the medial right arm measured about 1.5 x 1.5 cm and was non-tender, mobile, and associated with erythema and scabbing (Figure 1B). The remaining clinical assessments were unremarkable. There was a high index of suspicion for skin metastasis as a differential diagnosis; therefore, punch biopsies were taken from both skin nodules in the clinic.

Figure 1: Erythematous nodule on the scalp (A) and the medial aspect of the right arm (B). 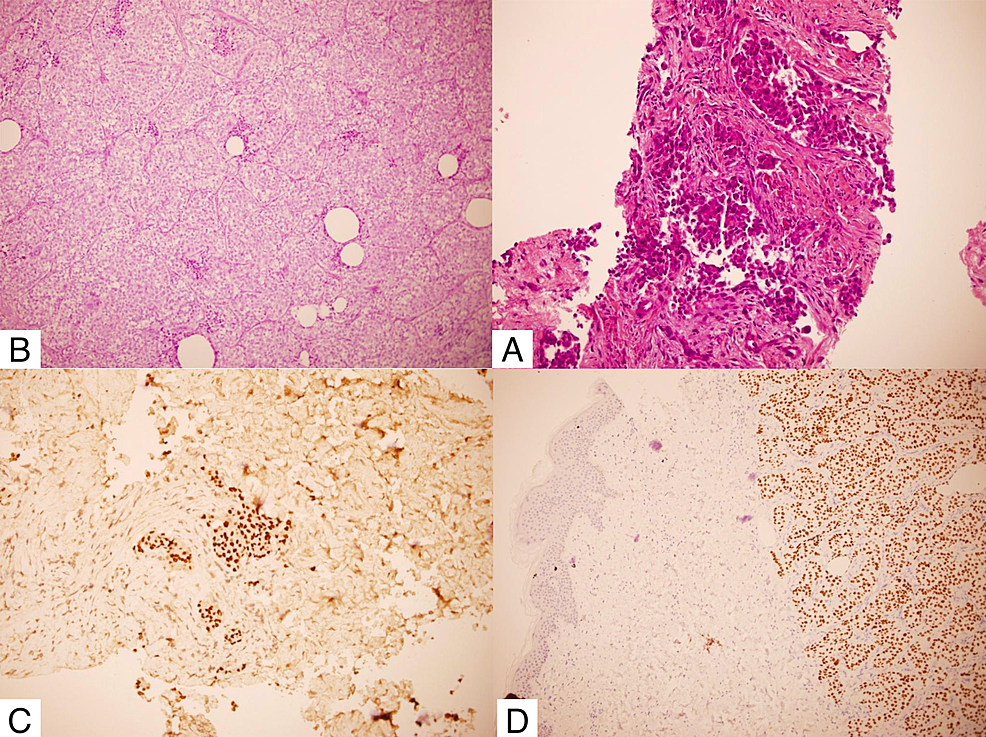 The serum thyroglobulin level was 3,431 μg/L and the anti-Tg antibody level was 127 IU/L. Staging workup was performed immediately after the diagnosis of skin metastasis. Neck ultrasound showed no local recurrence, and a diagnostic 131-iodine whole-body scan (WBS) revealed non-iodine avid disease. Computed tomography-positron emission tomography (CT-PET) revealed intense fluorodeoxyglucose avid lung and osseous metastases. Due to the non-iodine avidity, the patient was considered to be RAI refractory. She was started on low-dose sorafenib, an oral multikinase inhibitor, at a dose of 400 mg (200 mg twice a day) due to her poor performance status; she could not tolerate the medication after two cycles. The disease progressed over a period of time. After a multidisciplinary board meeting, the patient was transferred to palliative care to provide her with the best supportive care. The patient died of progressive systemic disease six months after the diagnosis of skin metastasis.

The skin is a very rare site of metastatic involvement in PTC; there are only a few case reports in the English literature to date (Table 1) [3-5,7-17]. Skin metastasis might manifest as a pimple, slowly growing nodule, or rarely bleeding ulcer [16]. The median onset of skin metastasis from initial treatment for primary PTC was 8.25 years (range: 1-21 years), as shown in Table 1. Our patient presented with cutaneous metastasis 30 years after undergoing total thyroidectomy, which has not been described in any previous case report. In three previous case reports, synchronous skin metastases were documented at the time of newly diagnosed primary PTC [11,13,15].

Numerous mechanisms for the eventuality of skin metastasis from PTC have been postulated, including direct extension, hematogenous spread, lymphatic spread, and the implantation of exfoliated tumor cells during biopsy or thyroidectomy scars [12]. The majority of skin metastases are located in the scalp, face, and neck, which may be explained by the rich lymphatics and/or vascular supply of these regions that confine the cancer cell emboli from the circulation and provide a microenvironment for the successful proliferation of metastatic foci [16].

The treatment of skin metastasis from PTC varies according to the underlying systemic disease and iodine avidity. Isolated cutaneous metastasis can be cured with wide local excision; however, for skin metastasis with systemic disease, RAI, external beam radiation therapy, and targeted therapy (sorafenib) are the available recommended treatment options, with variable outcomes as shown in Table 1. Our patient had a non-iodine avid disease and was treated with low-dose sorafenib that she was poorly tolerant to.

The prognosis is grave for patients with skin metastasis secondary to PTC with a high underlying tumor burden [11]. Our case is very rare as skin metastasis occurred 30 years after treatment for primary PTC, which has not been reported previously. Second, an extensive underlying non-iodine avid systemic disease survived for six months from the date of the diagnosis of the skin metastasis.

In conclusion, unusual skin nodules in patients with a history of thyroid malignancy should not be underestimated but should be addressed with a high index of suspicion of skin metastasis. A punch or excisional biopsy is advisable for a definitive diagnosis and prompt treatment. Earlier diagnosis can help identify the extent of disease recurrence and, therefore, to start the suitable line of treatment preventing further disease progression. Skin metastasis from PTC can present as a pimple, a slowly growing nodule, or even as a bleeding ulcer. It can present at any time; in our patient, it presented 30 years post primary cancer treatment.